What Would We Do?

Any halfway decent real-estate agent or commercial property manager could probably explain this week’s lectionary reading, the gospel parable from Matthew 21, in two seconds flat. It is all about landlords and tenants after all. And there is an entire body of business law devoted to them and their all-too-numerous disputes.

In Jesus’ telling, a vineyard owner contracts with tenants for the use of his land – and then promptly leaves town for another country. At harvest time, the same landowner sends his slaves or agents back to the vineyard to collect the rent – his share of the harvest in this case – from the tenants. But the tenants decide to take matters into their own hands. Apparently hoping to secure the property for themselves, they beat the first slave, kill a second and stone the third. Then they do it all over again, finally even killing off the landowner’s son in the hope of somehow gaining his inheritance.

What are we to make of this graphic tale of greed and mayhem, violence and murder? At the very least, the landowner in question, we might be tempted to think, ought to have done a more thorough background check before renting out his vineyard – the very source of his livelihood – to those scoundrels who end up murdering his slaves and son. Surely even in the ancient world people knew who was trustworthy or not. Word got around, after all, even before the Internet.

And then the obvious question arises. Why did they do it? The tenants had to have been fairly bright guys. Or they would not have gone into agribusiness in the first place – then as now not an easy way to make a living. Did they really think they could get away with it – get away with murder? Well, apparently, they did. Their greed got in the way of their common sense and reason. No doubt not the first time such a thing has ever happened – and not likely to be the last either.

The point of the story seems so obvious to Jesus’ hearers that they leap to it without a moment’s hesitation. The landowner, they declare in moral outrage, “will put those wretches to a miserable death and lease the vineyard to other tenants.” The story must have also resonated with the early church community, for it is one of only a very few of Jesus’ parables recounted in all three of the so-called Synoptic Gospels – Matthew, Mark and Luke.

Alas, the news these days is sadly still full of just such parables of greed and corruption. We know them too well. We are even now just exiting one of the worse financial crises in our history – by fairly common consensus the result in large measure of rampant materialism and greed. And millions of people have suffered the consequences. So, yes, some people clearly do still think they can get away with it. And some indeed do. The world has not changed all that much in the time since Jesus told his parable. 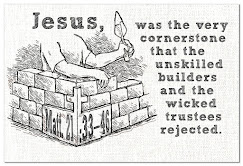 We might conclude that it simply does not pay to be an absentee landlord. Better to stay home, lock the back door and mind the store. After all, there is no place like home. Surely, that is where one can feel safe and secure. Maybe so but try telling that to someone whose mortgage is still upside-down or under water and is likely to remain so for some time to come. Let’s face it. Even security at home is sometimes an illusion.

The parable, of course, is about us as much as it is about thieves – about us as much as it is about the “chief priests and the Pharisees” who come to recognise themselves in Jesus’ words. The priests and Pharisees at least deserve begrudging credit, if not for their actions then for their insight into their own motivations. They want to arrest Jesus for his words and be rid of him. They knowingly seek to neutralise his potent message of God’s righteousness and Kingdom. What they do not know – and what we sometimes forget – is that it cannot be done.

No matter where we live or what we have, we are all no more than tenants in God’s Kingdom. Nothing ever truly belongs to us. In the final analysis, everything we have has been lent to us. Everything is borrowed for a time. As the old saying has it, we are living on borrowed time – quite literally. Like the priests and Pharisees of this narrative, we too might wish the world were different, that tenants were owners and servants, masters. But it is not so.

“They will respect my son,” the landowner erroneously concludes as he decides to send his child as emissary after his slaves are beaten and killed. To paraphrase Doctor Phil, television’s favourite pop psychologist, “What was he thinking?” If only the landowner had gone to his minister, he might have been set right. “Do not send your son,” he would have been told in no uncertain terms. “Call the police and report the incident. Begin eviction proceedings. Get back home.”

All good advice to be sure, but it is doubtful the landowner would have followed even his beloved pastor’s counsel. For the landowner’s economy is not that of this world. And perhaps it is just as well. He knows something we tend to overlook, that in the end it is not a matter of land, property rights, wealth, possessions or ownership. For a follower of Christ, it is ultimately not even a question of life and death. It is only the Kingdom that matters, a kingdom most decidedly not of this world.

If we miss that point, we miss the point of Jesus’ parable entirely. We Christians miss the Kingdom at work in our lives. For, the Kingdom is, in fact, ours – but only to the extent that we give in turn to others of all that has been so generously given to us. In God’s Kingdom, finally, that is the only way tenants become landlords.

Posted by Whitestarhaven's Ramblings at 07:55 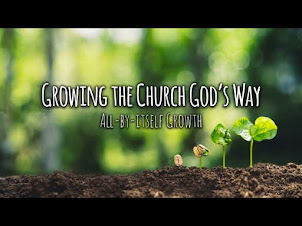